The Rotary Club of Esperance Bay (Inc) has been running Radio Auctions for over 30 years, raising money from local commercial and industrial businesses, farmers, contractors, and private individuals for the benefit of Esperance based projects and organisations.

Our WA Country Builders Esperance team donated a wheelbarrow full of tools (valued at $1000) to the fundraising event. Although not sold at the auction, the wheelbarrow was taken to the  local Football Grand Final which was held at Gibson football oval on Saturday 15th August, where a raffle was conducted. Club members wheeled the barrow around the spectator areas to sell tickets with the great result of raising $1,108.

The wheelbarrow was was one of the biggest single items donated and all funds raised from the auction were donated to three nominated beneficiaries including The Esperance Aged Care Facility, The Esperance Soccer Association and the Esperance Community Health Centre. 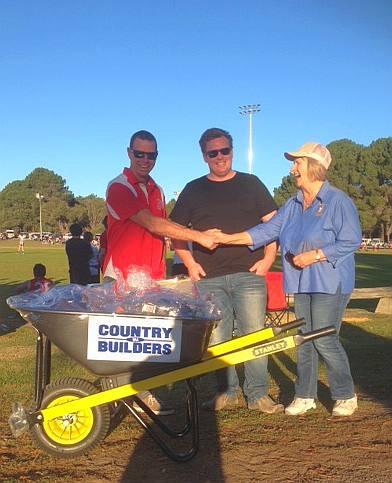